During the school holidays with Wee Man we visited the National Museum of Canberra. I had been before and although it is an interesting museum it’s definitely not at the standard that we are used to with the Melbourne Museum. The national museum in Canberra is great for adults but is not very kid-friendly apart from a fairly simple and boring trail to follow about some cat or dog or something- it was of no interest to William. There is a new exhibit which was designed for kids, but the graphics and story was again fairly sub-standard and didn’t really have much that interested wee man and I, although we did win the competition so that was probably the highlight.

The main reason for visiting the museum was due to Wee Man’s request, but I think he thought it would be similar to the Melbourne Museum. I did want to see the Rome exhibit which was just fantastic so we ventured out to the museum and even Wee Man agreed his favourite part was seeing the statues. I will only visit again if they have a special exhibit or event. 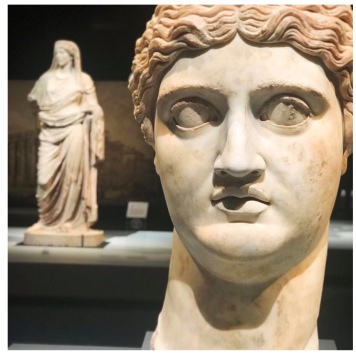 The Rome: City and Empire exhibit is definitely worth the visit and the sculptures are just exquisite. It was so humbling to be there seeing and witnessing these incredible items. The items have come from the British Museum and they are such grand and overwhelming items. It is just magic.
Some of the features on display are jugs, brooches, medallions, burial chests and statues. The Rome exhibit is suitable for children, although I wouldn’t take a child that didn’t know how to be quiet as it is quite a serene and silent space and there is also a free audio guide available via phone download for adults and children.
There is so much beauty and detail in the sculptures and chests. I loved seeing all the gods and goddesses and it was just so overwhelming seeing all the artefacts and beautiful items used so many years ago.

You can buy tickets here to visit the Rome Exhibition which is on display until February 2019.